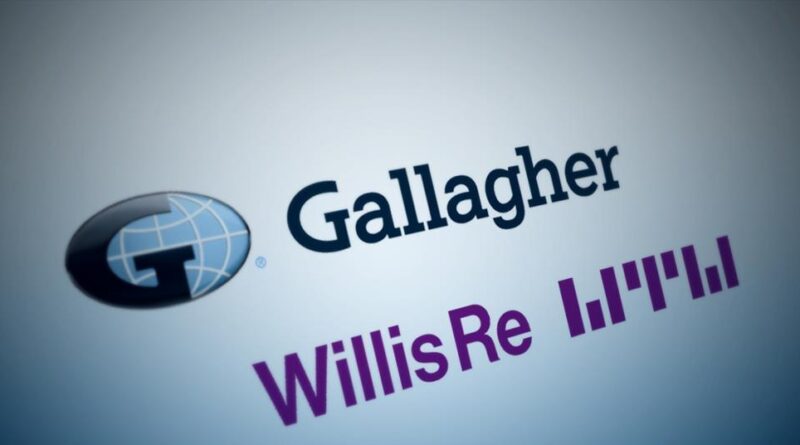 The announcement from the companies confirms prior stories from this publication on 2 August, and a follow-up earlier this week to report that the deal was imminent.

Under the terms of the deal, Gallagher will acquire the combined operations for an initial gross consideration of $3.25bn and potentially an additional $750mn subject to “certain third-year revenue targets”.

Overnight, the deal will make Gallagher the third biggest player in the highly consolidated and high-margin reinsurance broking segment, with a ~$750mn business.

Sources have estimated Willis Re’s Ebitda at more than $250mn – although this depends on how central charges are treated – pointing to a take-out multiple of around 13x based on these figures. This is a significant discount for a mature, prestige reinsurance broking business which is likely worth 15x Ebitda or above.

However, it is also significantly more than the implied multiple of the prior deal between Gallagher and Willis, which valued Willis Re at only around 9x Ebitda.

Willis had originally been due to sell Willis Re to AJ Gallagher as part of a May $3.6bn package of assets in a deal designed to assuage regulators’ antitrust concerns around the wider merger.

But the sale of the reinsurance unit was terminated when Aon and Willis dropped their impending combination, after they were unable to come to terms with the US Department of Justice following the filing of its antitrust lawsuit.

However, with Willis Re staff committed to the move to Gallagher, Willis was faced with the prospect of resurrecting the deal or accepting the haemorrhaging of disaffected talent if it looked to retain the business or auction it.

This publication revealed last Monday that Willis’ leadership had taken the pragmatic decision to make a management-friendly disposal of the business to Gallagher.

The press release confirms prior expectations that the renegotiated deal will exclude Willis’s cedant facultative business, which sits within its insurance broking segment not reinsurance. The unit has been heavily impacted by a wave of departures in recent months, with many including global fac head Toby Wemyss decamping to Guy Carpenter.

Gallagher CEO Pat Gallagher said: «Broadening our reinsurance brokerage offerings has been a strategic objective at Gallagher, and this acquisition will significantly enhance our global value proposition.

«We were very impressed with the Willis Towers Watson reinsurance professionals we met during our initial due diligence and strongly believe a combination will significantly enhance our offerings to clients and prospects.

“I look forward to welcoming the 2,200 new colleagues joining us as part of this transaction to our growing Gallagher family of professionals.»

Willis Re will be reverse-merged into Gallagher’s existing reinsurance broking business, Gallagher Re (formerly Capsicum Re). Details of the leadership team were not announced, but Willis Re CEO James Kent will head up the combined business, with current Gallagher Re CEO Tom Wakefield likely to take on a very senior role.

Before the collapse of the Aon-Willis deal, Gallagher had looked set to secure a once-in-a-generation windfall by seizing the opportunity to buy the reinsurance broking and continental European insurance broking businesses of Willis at highly discounted multiples.

That opportunity evaporated with the deal, but Gallagher still stands to win big through a highly strategic acquisition of one of the three leading reinsurance broking franchises.

Reinsurance broking is a highly consolidated market, with upwards of 80% controlled by Aon, Guy Carpenter or Willis Re, and a raft of challenger brokers looking to break up the oligopoly which seemed for a time as if it could become a duopoly via the Aon-Willis merger.

Gallagher will move from the tier of challenger broker to being a very well-established number three, multiples of the size of fourth-placed player TigerRisk, and the smaller challengers.

As part of its courtship of the Willis Re leadership team, Gallagher is believed to have earmarked significant funds for investment in the reinsurance broker.